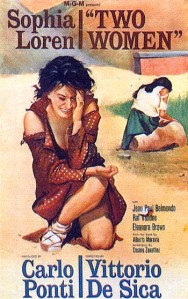 Two Women or La Ciociara is a touching story of a mother, Rosetta (Sophia Loren) trying to raise her barely 13-year old daughter, Cesira, during the Second World War.

Rosetta is a woman broken by her loveless marriage and the war. She and her daughter leave Rome to escape from the daily air raids day and to seek a quieter existence in the Italian countryside. This is part of Rosetta’s desperate attempt to preserve Cesira’s innocence. They only discover that the countryside is not as peaceful. The final 30 minutes of Two Women are utterly heartbreaking. Rosetta experiences every possible emotional state imaginable.

This was my first Sophia Loren movie and I was blown away by her performance. I never really knew much about her before other than she is considered to be one of the most beautiful women ever. I’ll admit that at first I thought at the start of this film, when you are as gorgeous as Sophia Loren is, you don’t deserve to be that talented. Yet it is those final moments, when her character experiences the pain of being violated by men again and losing a loved one, of seeing her daughter hurt and seeing the war steal what was left of Cesira’s innocence that convinced me otherwise.  It is incredible to say the least.

Two Women is also very significant in film history. For her role of Rosetta, Sophia Loren received the Academy Award for Best Actress in a Leading Role. This was the first Oscar ever given for a performance in foreign-language film. That has only happened two times. Roberto Benigni won in 1999 for Life is Beautiful; his award was presented by Sophia Loren.

All in all, Two Women is a film that is not only war and its disastrous affects, but the lasting bond between a mother and daughter that is heartbreaking and an overall rewarding movie watching experience.

I’ve returned from my week long vacation in the Catskills and I am sad to report that it was not a Dirty Dancing-esque summer. One day it will happen I swear. In other news, after being completely isolated from any celebrity news or movie watching for one week, I had a few shocks when I returned to NJ.

1. Brad and Jen are finalizing their divorce. I, like any other stalkerazzi in training (SIT?), wonder when Brangelina will come out as an item. I mean they were spotted in Canada at some dinosaur museum.

2. Chelsea is really Georgia. (That’s Days of Our Lives reference.)

3. Hillary Duff’s greatest hits album, “Most Wanted” is number one on the Billboard charts. I’m by far not the biggest music buff in the world but even I know that is wrong on so many levels

4. Brock Peters, who played Tom Robinson in To Kill a Mockingbird and starred in other great movies such as Carmen and Porgy and Bess, passed away on August 23. He was also a huge part of the sci-fi genre, with roles in Star Trek and the voice of Darth Vader on NPR. Peters was an important actor who most people probably haven’t heard of or know of his work beyond TKAM. (It’s a shame how that happens). I think his death is far more important than the three items I listed before.

I’m about to go watch the greatest movie ever. I have seen this movie over 100 times (literally) and it never ever gets old. I’ll give you a hint what it is…

“Nobody puts baby in a corner”

Sigh. It really is the best of all 80’s movies only followed by Risky Business and Flashdance

Last night, I watched The Graduate for what seems like the 101st time and like the first 100 times, it was amazing.

This movie is an essential for every person in the world no matter what movie genre is your favorite. The Graduate has something that speaks to everyone because we’ve been there or felt the way Benjamin feels throughout the film.

The plot: Benjamin (played wonderfully by Dustin Hoffman) has just graduated from college and he’s completely lost. He’s not sre what he wants to do with his life or where he is going. He is also very awkward, and goofy. This is where Mrs Robinson enters the film.

Mrs. Robinson (Anne Bancroft) is the dominating female presence throughout the movie and she and Benjamin have an affair. What happens next is strange, wrong, and hilarious on so many levels. Benjamin ends up falling in love with Mrs. Robinson’s daughter, Elaine (Katharine Ross). And…. well you’ll have to see it to find out what lengths Benjamin will go to win Elaine’s heart.

Anne Bancroft is the other star of this film. She plays one of the greatest characters in cinema history; a woman so dominating that she is actually weak.

So if you are looking for great humor, characters, music and an amazing movie, then The Graduate is just right for you. And remember, plastics! 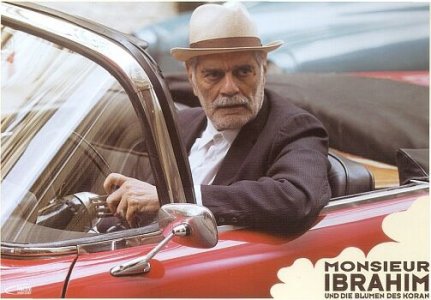 Omar Sharif (Lawrence of Arabia; Doctor Zhivago) stars as Monsieur Ibrahim, the owner of a small Paris grocery store. He adopts a local Jewish boy, Momo(Pierre Boulanger) as his own and the movie follows their unique friendship as it takes them on the journey of lifetime.

This the first foreign film in while that I really enjoyed. I’ll admit I’m a sucker for these types of movies. You know, when the older wiser man takes in the boy with no direction and becomes a father figure to him. But Monsieur Ibrahim added a little something extra that separates it from the pack.

This film explores to very different cultures. The one of the aging Muslim, connected to his religion and tells Momo that he only” knows what is in his Koran”. The young Jew, however, knows little of his faith. Set during the 1960’s in a working class Paris, it adds in splices of American influence with clearly American music. It is the music that connects the different cultures presented in the film.

Most of all, this film is funny, charismatic, full of life and rich with culture. Monsieur Ibrahim is an emotional journey that if you choose to take, you will find rewarding.