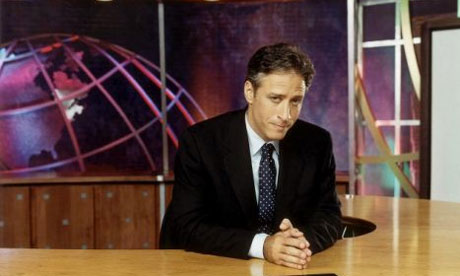 from NY Times  by Sharon Waxman

LOS ANGELES, Jan. 5 – Billy Crystal was on tour. Steve Martinwas prepping a movie. Whoopi – we’re really not too sure what’s up with her.

So in an act of either pure inspiration or complete desperation, the Academy of Motion Picture Arts Sciences has asked Jon Stewart, host of a popular fake news program on Comedy Central, to host the movie industry’s most prestigious event, the Academy Awards ceremony.

Mr. Stewart, 43, was appropriately humbled by the invitation. “As an avid watcher of the Oscars,” he dead-panned in a statement, “I can’t help but be a little disappointed with the choice.”

Gil Cates, the producer of the Oscar telecast, which will air on March 5, said in a statement: “I’m very excited,” adding that Mr. Stewart “is a superb choice witty, current, intelligent and charming.”

Mr. Stewart is also young and hip, something the Oscars has been striving to achieve in an environment of declining ratings for award shows. The Daily Show with Jon Stewart has won Emmy and Peabody awards for Mr. Stewart’s politically-barbed, too-close-for-comfort satire, which also spawned a best-seller, America (The Book): A Citizen’s Guide To Democracy Inaction.

The host is a constant critic of the Bush administration and its decision to go to war in Iraq, and his program has become a central stop on the political media circuit for both right and left-wingers, a sign that this year’s Oscar telecast might well include anti-Bush political humor. […]

Last year the Oscars looked to shake up their sagging telecast by having the irreverent comedian Chris Rock play host. But some Academy members found Mr. Rock, who took several jabs at President Bush, too irreverent toward the movie industry.

I love Jon Stewart and he is an excellent choice for Oscars host. Chris Rock was too much for often stuffy Academy members to handle; Billy Crystal doesn’t appeal to the younger generations as much (although I like jim). Jon Stewart is a great choice. This year’s telecast should be (crosses fingers) be a good one. The best movies plus a great host equals one awesome night.