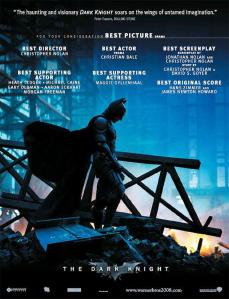 This week, the National Board of Review named The Dark Knightas one of the ten best films of 2008.The summer blockbuster has maintained the momentum it needs to push it to the front of the Oscar race and it is now a likely nominee for Best Picture, Best Director (Christopher Nolan) and Best Supporting Actor (Heath Ledger).

While it is unusual for comic book adaptations to be taken seriously, Batman Begins (2005) elevated the genre to new critical and commercial heights and the sequel has ensured that the superhero genre will be taken seriously.

Aaron Eckhart, who plays Harvey Dent, said: “It is a genre movie, but I think it goes beyond it with the themes in this movie. It’s an important movie sociologically. I feel like in this day and age, with terrorism and with the cancers of the city and people trying to find a voice within their own city, this is an important film. But it’s a Batman film, so it has that going for it. It has that going against it.”

But more than anything else The Dark Knight is Heath Ledger’s film and indicative of the mark he has left on Hollywood. The Oscar nominations will be announced on Jan. 22, the one-year anniversary of Ledger’s death.

Director Christopher Nolan said: “I’d like to think he would be very quietly proud of the fact that people really responded to it in the way he’d intended, were moved by the performance. As far as Heath goes, any and every validation of the success of his performance is a great source of pride to me and relief to me that I’ve done my end of getting his performance out there.”

Still the question remains, it is enough to earn Ledger a posthumous nomination? Some critics believe so and so does this one.

One thought on “For Your Consideration: The Dark Knight”