Episode 7 of Skins gives us a closer look at JJ’s (played by Ollie Barbieri) life and shows us that he is more than just the third wheel in the Freddie-Cook-JJ friendship. Instead of someone one just listening to his problems, JJ is just overmedicated. His mum is overwhelmed by his autism diagnosis and can’t be bothered anymore. But most of all, JJ is tired of Freddie and Cook’s feud and just wants them to be the three Musketeers again. Easier said than done.

The episode opens with a beautiful sequence in JJ’s room. Set to a classical piano composition, he is looking at the giant map that helps him figure out life. His room is mess following one of his uncontrollable rages. All his problems point to one person: Effy.

JJ just needs someone to talk to and that person isn’t his counselor. Instead of listening to what JJ has to say (“Nobody likes magic. Or there isn’t a point. Or they just don’t like me enough.”), his psychiatrist just says “don’t do that,” and prescribes him more drugs. It’s perfect then, that he runs into Emily at the clinic and after Emily’s big revelation (“I want to have sex with girls.”), the pair begin a necessary friendship. She pushes him to combat his problems head on.

The first stop is Freddie’s. Well, someone is over Effy, as JJ and Emily walk in on Freddie and Katie having sex. I don’t see their relationship lasting long, but there just better be an “Unseen Skins” about how these two got together. Anyway, JJ lets it spill that Emily’s a lesbian, Katie flips out and Emily, not taking her own advice, runs away from her problems and instead of talking to her sister.

Without Emily’s help, JJ is lost. Freddie tells JJ that he has to choose between his two best friends, which is completely unfair but bound to happen. JJ doesn’t know what to do but when he accidently overhears Cook trash-talking him to a girl who he is currently having sex with (“Everyone’s got to have a mate whose a twat and whose not going to try anything…”), JJ finally gets mad.

Assuming that Effy is the girl Cook is with, JJ goes to Effy’s house. Effy’s home (much like her life) is in complete disarray; the Queen bee isn’t the queen anymore. After a priceless scene when JJ walks in on Effy topless, he tells her to stop trashing him when she is with Cook. One problem: Effy hasn’t seen Cook for days. This sparks Effy and JJ conversation about their issues. “I’m officially off the rails JJ,” she tells him. He asks her to stop ruining everything. She says she can’t do that but would like to be his friend. JJ simply shakes his head no and leaves Effy alone.

On his way to Cook’s (who lives in the student dormitory), JJ makes a shocking discovery. Pandora and Cook, who hooked up in Episode 4, are having sex. Cook provides some stellar insight into their (very wrong) hookup: “It’s life J. You’ve got to get in there… If you’re not going to do it, then you’re a pathethic little pussy for it.” So what about Thomas, Pandora’s boyfriend? This won’t end well.

Well JJ FINALLY stands up to Cook. “Just care,” he says. “About me! You fucking twat!” Still, after Cook assures him that he cares, Cook still treats JJ like an accessory and uses him as the lookout during a drug deal. As payback, JJ tricks Cook into taking his meds. 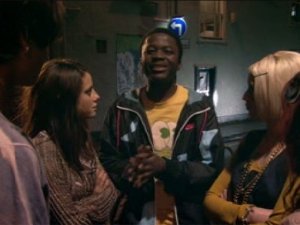 In typical Skins fashion, the next scenes take place at a club. The entire gang gets together and you can cut the tension with a knife. Thomas is completely oblivious to this. Naomi tells Effy that she likes Emily and is relieved when Effy doesn’t care whether she’s gay or straight. Freddie and Katie go public with their relationship. Katie seems to have accepted Emily’s coming out and treats Naomi with some respect. But while in the club, a stoned Cook completely loses it and Freddie has to save him (again).

What follows is sheer brilliance. Cook’s revelations finally shows the human side of this very unlikeable character. “Cookie’s got nothing. Cookie’s always got nothing,” he says. He tells Freddie that he loves Effy but it won’t work because Effy loves Freddie. These guys better make up their minds soon; this who loves Effy drama is getting really old, really fast. Cook also reveals to the gang (including Thomas) that he “popped” Panda.

Somehow after all of this, Freddie and JJ make-up, as long JJ gives Freddie some space. And the look that Freddie and Effy exchange at the end of it all is so intense, so emotion-filled. It’s perfect.

When Emily and JJ reunite, she is upset following a fight with Katie (most likely about her sexuality). She asks JJ if he asked for things and how it went (remember she left him alone to fight his own battles). He tells her: “I’d say, bad on the face of it, but in another sense, you might say its too early to tell.” Amen to that, JJ. Their friendship is perfect; they both needed someone to talk to and who wasn’t in their immediate circle of friends. Their friendship will probably be the strongest of the season.

While I have a few issues with Emily letting JJ lose his virginity to her as a “once only charity event”, the episode’s final scene is another stellar moment. J.J and Emily walk down the stairs in the morning . When he introduces Emily to his mum, the little smile on his mother’s face says it all: JJ is going to be just fine. It’s the little moments like this that make me loves Skins.

The rest of the gang, however, is a whole other story. All of their secrets are out in the open and the gang is about to go camping for the weekend. Based on the preview for Thursday’s episode “Effy”, it is time for the shit to hit the fan.