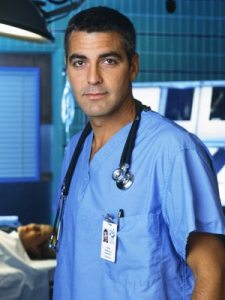 George Clooney’s not so secret return to E.R. aired last night and it was magical. I literally squealed when I saw Clooney, Julianna Margulies and Eriq La Salle names in the credits. I squealed even louder when Ross and Hathaway made their (unassuming) first appearance in the episode. I’m so freakin happy right now; this must be what it feels like when you’re kids come home from college.

Overall, it was a great episode that also guest starred Susan Sarandon and Ernest Borgenine. Dr. Ross is now an attending physican in Seattle and Hathaway is a hospital administrator. Benton has been at Northwestern the past seven years. When Carter needs a kidney transplant, their lives become intertwined but of course, they’ll never that.

There were so many perfect moments with the original cast members but here are my favorites.

Dr. Ross sits down with Rosgotra and Taggert and they try to figure out who from his days are still around.

I’d like to point out Abby Lockhart delivered Ross and Hathaway’s daughters. Okay, enough of my ER-fanatic tendencies.

Also very crucial to this episode: The Benton/Carter bromance lives.

Susan Sarandon’s guest appearance as a grandmother dealing with the death of her grandson just screams “Emmy nominee”.

Last but not least: Carol is updated on the status of the transplants and updates Ross. The kidney went to some doctor in Chicago. They have no clue the kidney recipient is one of their former co-workers, and I wouldn’t have it be any other way.

I loved this episode; I’ve already watched it three times.

Thoughts on the E.R. reunion?

One thought on “In Which Dr. Ross Returns”