In Bernardo Bertolucci’s The Dreamers, the character’s cinephilia is correlated with eroticism.

The three protagonists – American student Matthew (Michael Pitt) and twins Isabel (Eva Green) and Théo (Louis Garrel – are brought together by their love for cinema. They meet at a rally at the Cinémathèque Française, a place for film lovers today that is entrenched in a mystique that transcends movies. Matthew is drawn to the mysterious twins and their playful, theatrical nature. The trio’s relationship quickly grows and revolves around games like performing scenes from infamous movies. 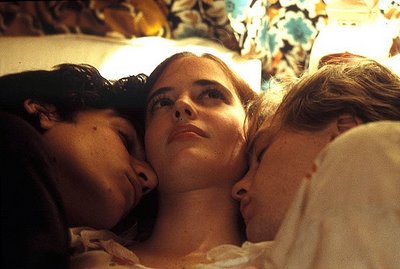 This post is part of my Birthday Blitz Marathon.

One thought on “Birthday Blitz: The Dreamers (dir. Bernardo Bertolucci, 2003)”