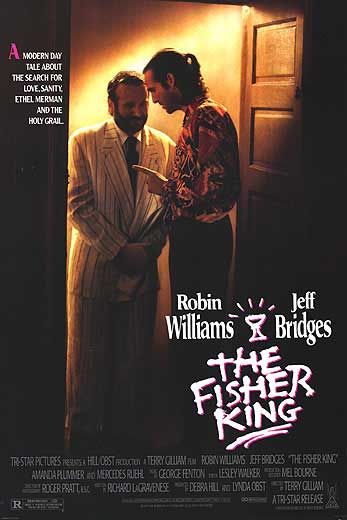 The movie has a bit of romance, a bit of drama, a bit of slapstick, and a bit of Arthurian legend. (So, really Terry Gilliam is the one director who can make this all work.)

Jeff Bridges is Jack Lucas, a radio DJ whose on air rant inadvertently causes a mass killing at a New York City restaurant. Three years later, Jack encounters a homeless man, Parry (Robin Williams) who is searching for the Holy Grail. Jack is reluctant to be near Parry until he learns that Parry’s wife was killed in the diner shooting, leaving Parry in a catatonic state for several years. Jack and Parry begin an unlikely friendship as Jack tries to help Parry find love with Lydia (Amanda Plummer) a shy accountant he has admired from afar.

And then there is greatness when the fantasy, comedy and romance come together with glimpses of New York City at its finest. That is when The Fisher King is a wonderful revelation.