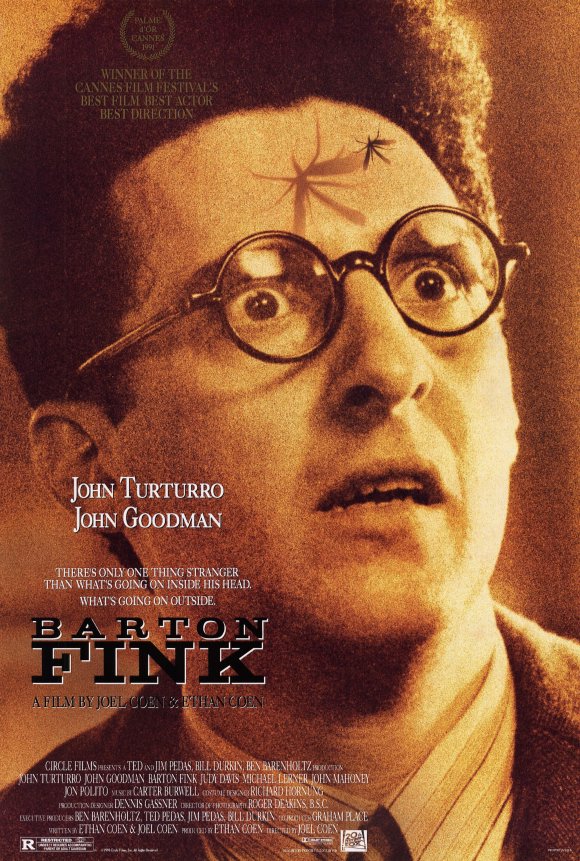 It’s ironic that Barton Fink is the last movie watched for this blogging marathon.

In Barton Fink, the title character (John Turturro) is a New York City writer who moves to Los Angeles after a successful Broadway play to write for the movies. Barton considers himself to be a voice of the common man, something he grapples with as he finds himself fraternizing with Hollywood big shots. He settles into the creepy Hotel Earle and meets his neighbor Charlie Meadows (John Goodman), a seemingly nice insurance salesman. Barton can’t seem to write his Wallace Beery wrestling picture and he struggles with a serious case of writer’s block that just spirals out of control.

I think I speak for many people when I say that writer’s block is a bitch. If Barton Fink is what really happens to you when you struggle with writer’s block, then it is a perfect example of why I hate it. (Except maybe the part where you get to hang out with a drunk John Mahoney. I could enjoy that.)

Writer’s block makes you do some crazy things.  Because of it your mind has a tendency to wander all over the place. In Barton Fink’s case, he loses track of what is really happening and what is fictionalized in his mind. How real is the Hotel Earle, the characters he encounters, or even Barton himself?

For most of this Birthday Blitz marathon, I struggled to write about the 24 movies. First there was the logistical issue of renting all the movies followed by that pesky hurricane that derailed everything. By the twelfth movie, I really began pulling nonsense out of my ass. Why else would I opt to post videos from Spies, a pointless interview with my dad,  pictures of Richard Gere from the 70s, or live-tweet Gettysburg? Because some days I really felt as though I had to write something, anything, to get it done and move on to the next movie.

The point of this post is that I am very done with this blogging marathon and good riddance. Until next year. (Maybe.)

Or is it? After all, nothing in Barton Fink is as clear as you think  in the end.

This post of is part of my Birthday Blitz Marathon.