I watched The Town last night. It was the first time I watched this Ben Affleck-directed crime film since I saw it in theaters last October and my thoughts are essentially the same. Here is an excerpt of what I wrote at the time:

What The Town demonstrates is Affleck’s exceptional ability as a director to tackle large-scale productions such as this. Affleck could not have executed the brilliantly crafted chase sequence set in Boston’s congested North End more perfectly.  But one good chase sequence that has you jumping in your seat explosion after explosion cannot and does make a movie.

I don’t know or how but I also apparently enjoyed Blake Lively’s performance back then. Go figure. (To be fair, my hatred against Lively has only grown in the last year.)

So I was less enthralled by The Town this time around. Here are five things I realized about The Town thanks to a second viewing.

1. It’s all about the action scenes

The three action sequences define The Town and they are the absolute best aspect of this movie. Each one is engaging, suspenseful, and perfectly edited. More time was clearly spent making these scenes great than on anything else in the movie. To execute the bank heist in the North End, takes some serious skill and it shows. As my sister rightly pointed out, “They probably just made this movie so they could have a shootout at Fenway.”

2. This is Jeremy Renner’s movie

Most of the characters (Jon Hamm’s FBI agent; Blake Lively’s drug addict single mother) are one-note and the performances are laughable. But not Renner’s. Jem  Coughlin is the only character with any sort of substance. He’s dangerous, a loose cannon and a perfect anti-hero to Ben Affleck’s whiney protagonist. Renner captures Jem’s complicated nature perfectly.

The Town features Pete Postlethwaite’s second-to-last performance. He died in January, three months after the film’s release and now his character, mob boss and florist Fergie, has a different impact. You’re watching a great actor get into a character who is so wonderfully corrupt, you wish there was a prequel just about him.

4. Ben Affleck thought he was starring in a Sirk movie.

The Town really tries to emphasize central character Doug MacRay’s internal struggle. He is struck between his upbringing, his street life, and his dreams to leave Charlestown. He had a chance to get out as a teenager but just followed in his father’s footsteps. (You were great in that one scene Chris Cooper!) While MacRay’s desire to leave his life of crime behind is admirable, he never shuts up about it.  I get it. Your dad’s in prison, Your mom’s a dead junkie. You are a failed hockey star. You constantly need to prove yourself in the most melodramatic ways possible. This character, like every character in The Town,  is an archetype for someone who can’t leave their baggage behind. The worst part is that Doug MacRay sees himself as a victim of his upbringing and not always an active participant in why he’s a career criminal.

5. The Town has a serious woman problem 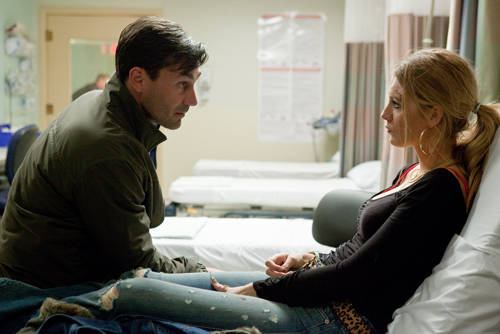 There are three types of female characters in The Town: the dead junkie, the living junkie/single mother, and the yuppie career woman. These are glaringly awful characterizations that create less than sympathetic characters. These women exist in a world that is created and controlled by the actions of men. This is a world they can never escape. Krista Coughlin (Blake Lively) can only leave Charlestown if someone decent (probably a good-hearted gent) takes sympathy and helps her. Claire Keesey (Rebecca Hall) stays put and works towards making Doug’s dreams for Charlestown (a brand spanking new ice hockey rink for teenagers) come true. Basically, the portrayal of women in The Town is absolute crap. It’s a movie about the actions of men and women are just pawns to make the men live better lives.

What are your thoughts on The Town? Did you find it more problematic the second time around like I did? Or am I completely off track? Sound off below.

6 thoughts on “Five Things About The Town”