I have decided that watching every Elvis movie is a good idea. There are 31 movies in total. This project will likely drive me insane.

After his return to acting in G.I. Blues, Elvis Presley wanted to be considered a serious, dramatic actor. He wanted to ditch the guitar and play characters with real problems other than how to woo the pretty girl. Despite this noble aspiration, Presley’s next two films Flaming Star and 1961’s Wild in the Country failed to impress critics and were box office failures.

Two posters for Flaming Star capture how the facets of Elvis’ screen persona could not possibly coexist. (Especially during the waning days of the studio system.)

On one hand, Elvis always has to portray a charismatic young man who is ready to wield a guitar and entertain at a moments notice. This is the preferred way to maximize profit from an Elvis movie. But on the other hand, Presley saw himself as a dramatic actor, ready to accept challenging roles. Like the character Elvis portrays in Flaming Star, I think Presley often found himself struck between these two pieces of his star persona.

In Flaming Star, Presley plays his most complex character to date. Pacer Burton is a Texas cattle rancher who finds himself constantly struggling between two identities. (Because that is definitely what you took away from the term ‘half-breed’.) Pacer lives an unassuming life with his white father Sam (John McEntire), Kiowa mother Neddy (Dolores Del Rio), and half-brother Clint (Steve Forrest). The Burtons have a profitable ranch and surround themselves with many (white) friends who live in the nearby town, including the pretty Roslyn, played by Barbara Eden.

In the opening scene, the group gathers to celebrate Clint’s birthday. My favorite moment in any Elvis film is when Elvis’ character performs for the first time. In Flaming Star, we watch the non-communicative Pacer pressured into entertaining the group before dinner. During this performance, Pacer instantly transforms from the aloof brother who keeps information about Indian attacks to himself to an engaging performer who enjoys the company of others. It is a very hokey scene.

Elvis’ first performance in any movie is usually insignificant. Either his character is plucked from a crowd and magically performs at a moment’s notice, like in Loving You. Or the scene isn’t integral to the plot, like the song “Crawfish” in King Creole. However, “A Cane and A High Starch Collar” is the only song Presley performs in Flaming Star and it has a significant meaning. The group has just experienced a final exercise in pleasure and enjoyment before their last supper. The film’s main conflict is about to disrupt any sense of peace and happiness the white settlers know.

Flaming Star is set in 1878, a time when Indian attacks against Texas’ white settlers were a common occurrence. Or so the film wants you to believe. In actuality, most Native Americans were living on reservations at this point in American history. But the small numbers of Native Americans who remained at large during the late 1870s (if any) were frequent adversaries against the white settlers. Anyways, I won’t ramble on about the history of Plains Indians and the American West. You should just read this book. Back to Flaming Star…

The progressive Burton family finds themselves in the middle of the conflict between white settlers and Indians. A band of Kiowas begins attacking and killing their neighbors; the Burtons are spared because Neddy and Pacer are their relatives. This causes the Burton’s neighbors to turn against the family, to insult Neddy, and even shoot their cattle. Pacer then finds himself in a difficult position when the Kiowa leader, Buffalo Horn, asks him to join the raids.

Flaming Star is one of the few studio-era films I have seen that depicts Native Americans as actual people and not just violent aggressors. A brief scene shows Neddy and Pacer visiting with their Kiowa relatives at their base camp. Here we see Kiowa families and learn that they want the same things as the white settlers. You know, the right to live freely on the land without outside forces interrupting their way of life.

Yet how the main Indian characters are presented in comparison to the white characters is problematic. Neddy and Pacer are never fully white because they can quickly connect to their Indian heritage, whether it is through understanding nature or killing others. There is something always “savage” about them.

We learn that many years before Sam Burton traded goods with Neddy’s father in exchange for Neddy’s hand in marriage. (We don’t need to get into the implications of that concept.) Neddy raised Clint as her own son and adopted Anglican culture. She is a loving wife and mother as well as a dedicated Christian. She has all the characteristics of a good white woman. The other settlers have no issues with Neddy or the Burtons until the attacks begin. She is then belittled and called a “squaw”.

Yet Neddy considers herself to be a bridge between the white settlers and the Kiowa. This is why Neddy and Pacer visit their relatives. Neddy hopes to stop any Indian attacks by appealing to her family. Any chance at peace is ruined when (spoiler alert) Neddy is shot and killed by a vengeful settler. But not before Dolores del Rio gets a fantastic death scene. As Neddy is waiting for a doctor that never arrives, her instincts cause her to follow the “flaming star of death”. 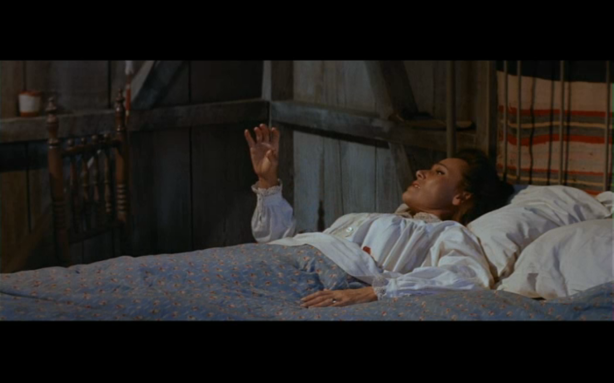 Neddy leaves the homestead and walks into the wilderness, slowly discarding any markers of her white identity. Her shawl flies away. She is barefoot. She wander until she collapses and eventually dies in her husband’s arms.

As she is dies, Neddy returns to her “true self”, the self that is defined by her bloodline and not her adoptive culture. This instantly translates to depicting Neddy as someone who believes in spirits and is easily in sync with nature. Because all Native Americans paint with the colors of the wind.

Neddy’s death becomes a catalyst for Pacer to join the Kiowa. He is more than happy to fight the white men who inevitably caused his mother’s death. This is until his father and brother are attacked by the Kiowa after Buffalo Horn promised they would be safe.

Interestingly enough, at some point during the battle, Pacer loses his shirt. 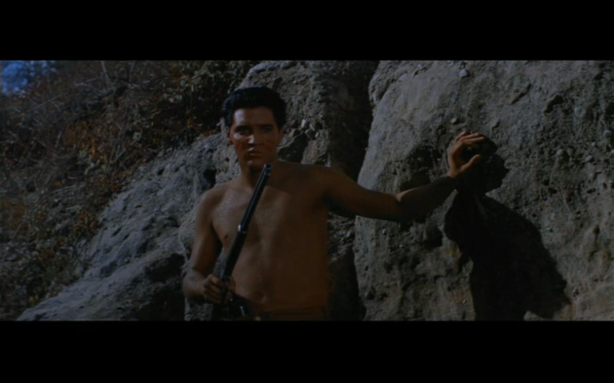 The decision to have Pacer/Elvis be shirtless during these final scenes might seem completely gratuitous. But I find that this costume choice adds another layer to the already muddled depiction of race and identity seen throughout Flaming Star. The shirt is a marker Pacer’s white, Anglicized identity. Without it, Pacer can become more like a true Kiowa. He is now a ruthless warrior who is willing to kill his kin.

Flaming Star‘s final scene is dedicated to Pacer’s redemption. After singlehandedly defeating the Kiowa, Pacer returns to the town, knowing he will soon die. (He has seen the flaming star of death.) Because he has sacrificed his life to defeat the Kiowa, Pacer is finally accepted as a civilized white man and rides off into the wilderness to die alone.

Flaming Star is the kind of movie that will make your head hurt if you overanalyze the presentation of race and identity. Yet this is also why I found it to be a fascinating film.

I should probably also mention Elvis’ performance. (This is a post about an Elvis movie after all.) The fact that Presley was rarely allowed to be a dramatic actor will always be a disappointment. Films like Flaming Star and King Creole are some of his best performances and they are the ones worth seeing, even if the film as a whole is puzzling.

Odds and Ends about Flaming Star: 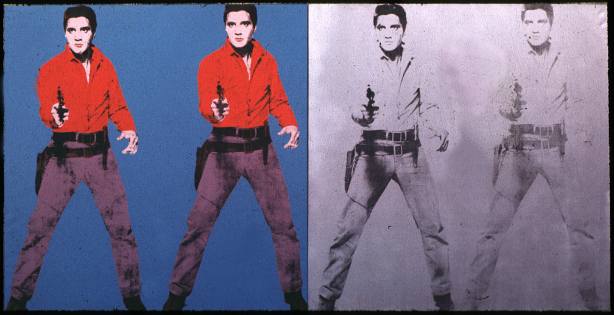