Happy Galentine’s Day! I celebrated the greatest day of the year this past weekend by hosting a craft party for all of my favorite ladies to enjoy. Although I hate sharing DIY tips (that’s why I’ll never make it as a lifestyle blogger), I have made an exception for Galentine’s Day. Here are some ways you can celebrate the best ladies in your life.

1. Spend an unnatural amount of time at Michaels.

Surprisingly it only took three relatively painless trips to my local Michaels to pick out a craft project, find appropriately tacky decorations and not go completely overboard. Hah. Who am I kidding? At this point, I’m basically Abbi at Bed, Bath, and Beyond.

How can you provide beautiful gifts for your favorite ladies if you do not know every detail about their lives? My highly analytical survey (who’s your feminist icon? Favorite female politician? Favorite Book? Girly cocktail?) resulted in some custom party favors. Throw in some random questions (What’s the last book you read? Favorite color?) just for fun.

Pre-crafting is just like pre-gaming. You eat, you drink, you knit, you cut and you glue furiously until 3AM. You should always pre-craft so much that you need to take Alleve the following morning.

I’m not Leslie Knope. I actually sleep. I do not have a binder creator on retainer. I’m not skilled at making mosaics out of your favorite diet sodas. But I can search every store for the perfect gift bags swag.

Galentine’s Day Craft Parties are not Paint Nite. (I hope. Please never let it become Paint Nite.) The key to successful craft party is to find something everyone can make and will actually want to use or gift to someone else. And allow your guests to do whatever the hell they want. 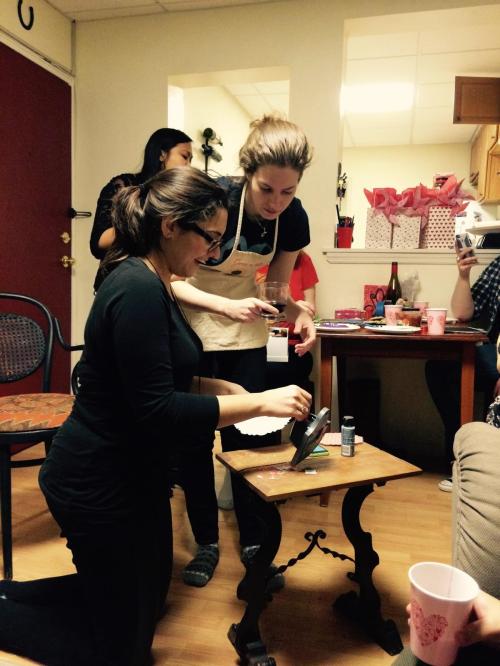 If you follow these steps, Galentine’s Days parties are a fantastic way to cut loose in February and enjoy the greatest holiday that really should be a national holiday.

Leave it to Fifty Shades of Grey to pull me out of my self-imposed blogging exile. I’ve watched the trailer a few times now and I… I just… I have some thoughts. For starters:

This is Zoe Kazan.

This is a white guy.

He has a helicopter.

She has… well I’m sure she has hobbies and friends and something exciting going on in her life that is equally as exciting as that helicopter. Perhaps she enjoys scarves as evidenced by the one time she is seen wearing a scarf.

There is also an elevator.

But this is not Grey’s Anatomy.

Well, Beyonce is on board with this movie so I guess it’s fine.

Fifty Shades of Grey hits theater February 13. Your mom will ask you to go with her. Don’t.

A new Expendables movie is like Christmas morning when you open your presents and wonder: “How the hell did you come up with this?” That’s basically what I thought as I watched the trailer for The Expendables 3: This Time With Young People Who Understand TechnologyThe Expendables is a who’s who from every action film and the trailer is, fittingly, a roll call. The familiar faces plus some new additions to the Expendables crew will bring more of the same absurd goodness to the big screen.

END_OF_DOCUMENT_TOKEN_TO_BE_REPLACED

It has been well over a year since I did one of these pointless lists. (I’ll never forget you, Hansel and Gretel.) But 300: Rise of An Empire is a movie worthy of this great honor. If you enjoyed it’s kind-of, sort of but not really 300 (and I did), you’ll probably get a kick out of this movie. If only because Artemisia (Eva Green) makes you question why Themistocles (Sullivan Stapleton) is even there.

8. Xerxes is missing some gold. He should borrow some from Smaug.
9. “You traveled a long way to stroke your cock while watching real men train.” What?!
10. There are absolutely no stereotypes about Persians in this movie whatsoever.
11. Where did the Persians find the space store all Artemisia’s outfits?
12. Now I don’t think any of that happened.
13. Is it really necessary to whip the slaves? They’re already doomed.
14. ROCKS
15. Artemisia: Greece :: Captain Ahab: Moby Dick.
16. That sex scene was already in Dark Shadows.

17. How did the Athenians get their spears back in between battles?
18. Spartans. Amirite?
19. Seriously? Where did that horse come from?
20. I don’t remember Cook looking anything like that.
21. Lena Headey, guys. Lena Headey.
22. This entire movie is just one extended sex scene.
23. So… I guess there won’t be an Artemisia-Themistocles TV spin-off.
24. Eight years later and I still don’t know how the Persians transported those elephants to Greece.
25. And there are no words for this.

I saw 42, the long overdue biopic about Jackie Robinson, last weekend. I was going to publish this post on Monday (Jackie Robinson Day). But with everything that happened in the last week, I thought this list might be too stupid to post. But whatever. 42 is a feel-good movie about integrity, perseverance, and loving your f-ing team. And maybe it will restore your faith in humanity a little bit. That is very necessary right now.

So yeah, I experienced more emotions during 42 than I was prepared to handle. Such as:

When a kid, who later is revealed to be Ed Charles, sees a baseball field for the first time.

When that same kid chases after Jackie and he tosses him a baseball.

When Wendell Smith reminds Jackie that he is not the only one who struggles because of segregation and that what he doing is bigger than himself.

When Jackie turns his Dodgers jersey around and reveals the number 42.

When Jackie is relentlessly taunted by Ben Chapman but can’t respond. So he goes into the tunnel, smashes his bat, cries, and is given a pep talk from Branch Rickey. Then he hits a home run.

When that white kid copies his father’s behavior and momentarily taunts Jackie.

When Pee Wee Reese embraces Jackie and I don’t even care that it probably didn’t happen that way.

When I realized Branch Rickey’s assistant was played by T.R. Knight and I was reminded that Grey’s Anatomy has not been good since George O’Malley died.

When Branch Rickey admits that Jackie made him love baseball again.

When the Dodgers win the pennant and Rachel Robinson is high-fiving everyone on the streets and even Red Barber is stoked and we pretend that the 1947 World Series never happened.

When the end credits roll and there is footage from Jackie Robinson Day with current baseball players wearing the number 42.

In conclusion, I am a big sap and nothing turns me into a pile of mush more than a good baseball movie. Never get me started on how much I sob during A League of Their Own.