Since seeing Blue Valentine, I have been unable to shake its harrowing depiction of marriage. Few films stay with me this long after I have see them. But the relationship between Cindy (Michelle Williams) and Dean (Ryan Gosling) is so beautifully damaged, it is impossible to forget their marriage.

This relationship also got me thinking. How often do we see couples in the movies who have been together for the long haul? The most romantic comedies bring together your Harrrys and your Sallys. But these movies establish false expectations for courtship and never show what happens after the credits roll.

Even the greatest movie couples – Sam and Ilsa, Jack and Rose, Westley and Buttercup – don’t say much about marriage. I’ve written about Hollywood’s supercouples before but none of the couples that I profiled made it down the aisle, let alone showed what real commitment looks like.

Then there is Barkley and Lucy in Make Way for Tomorrow. For every movie that gives us an iconic pairing, this one trumps them all. This Leo McCarey film about an elderly couple forced to separate when none of their five children will take both parents in will tug at your heartstrings with its simple and heartbreaking depiction of love, marriage, and commitment.

It is decided that Barkley and Lucy will stay with their children for just “a few weeks” but their sudden presence in their adult children’s lives becomes burdensome. As Roger Ebert writes in his wonderful assessment of the film: “Make Way for Tomorrow is quietly observant about the social awkwardness of the situation.” Lucy interferes with her daughter-in-laws bridge classes; Barkley is relegated to sleeping on the couch. We hope for Barkley and Lucy’s sake that the couple is reunited soon so they can present a stronger united front to their children, who have unintentionally cast their parents aside.

In the film’s final 30 minutes, when Barkley and Lucy are finally reunited before they are to separate again, Make Way for Tomorrow captures something most films do not. Real emotions without any exaggerations. The strangers who observe the couple as they revisit their honeymoon see something Barkley and Lucy’s children could not: unrelenting love and respect for one’s partner. No sequence will make you cry more than these final minutes of Make Way for Tomorrow. 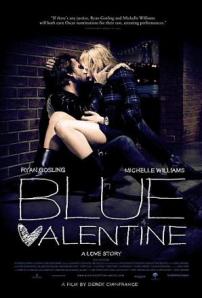 It has been days and I cannot stop thinking about Blue Valentine. The performances by Michelle Williams and Ryan Gosling are so raw, powerful, and gut-wrenchingly emotional that they make any other depictions of marriage look like a total sham.

Williams and Gosling are Cindy and Dean, a couple living in rural Pennsylvania with their young daughter. Their marriage has reached its breaking point and it is Frankie who holds them together. Cindy feels stuck in her life, having given up on her med school aspirations. Dean paints houses for a living and drinks all day, wasting away any potential. In an attempt to save their marriage, he takes his wife to a motel that only exacerbates the inevitable dissolution of their marriage. The film jumps between these moments of profound sadness, frustration, and arguments and flashes of the couple’s happier days when they were blissfully in love and beginning a heartfelt romance.

Blue Valentine captures the fleeting moments that make life so precious. Those happier days are met with sweet moments. Dean serenading Cindy with a ukulele – the song that accompanies the film’s simple yet lovely trailer – especially stands out. These scenes are filled with light and brightness, much like the character’s hopes for the future. The present-day scenes are darker, more claustrophobic as the realities they have become trapped by – parenthood, dead end jobs – have strained the relationship. You begin to feel just as trapped and at a loss as Cindy and Dean.

The flashbacks fit effortlessly with the present-day narrative, a testament to the sharp directing, writing, cinematography, and editing led by director Derek Cianfrance who co-wrote the script with Cami Delavigne and Joey Curtis. These elements become emotionally real because of Gosling’s and William’s vulnerable and poignant performances.

Poignantly, no true conclusions are reached. Cindy and Dean’s divorce seems imminent but Blue Valentine does not preach anything about marriage or divorce. The characters are just as they are. First they are young and perhaps naïve and then they become older, more self-aware.

At the end of it all you have wonder, did they know each other at all or were they just clinging  to idealized dreams of romance and marriage?

So what if Blue Valentine, a marriage drama starring Ryan Gosling and Michelle Williams, received an NC-17 rating? Good movies are good movies regardless of their rating. The trailer for this film (embedded below) has completely captivated me and I already know that I will go to great lengths to see it.

Blue Valentine will be released December 31.