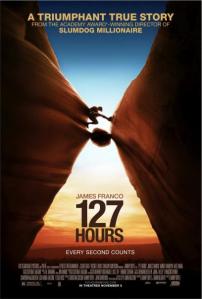 127 Hours was the one best picture nominee I was most skeptical to see. I was skeptical for several reasons. Director Danny Boyle’s previous movie Slumdog Millionaire was hardly my favorite film of 2008. (That honor goes to Goodbye Solo.) Uber-renaissance man James Franco is hardly my favorite actor; I just don’t see the appeal. And, truthfully, I did not see how the story of Aron Ralston amputating his arm after spending five days trapped by a boulder could be translated into film. My cynicism when it comes to film is sometimes my worst own worst enemy.

What Danny Boyle has created is the rare film that blends raw emotions, sentimentality, and high stakes action.

127 Hours gets off to a lightening fast start. As Aron Ralston (Franco) prepares for a day of canyoneering in Canyonlands National Park, Utah, he leaves his Swiss Army Knife behind. Aron’s morning is seen in congruence with scenes of places across the world. These are a series of rapid shots made up of three panels of simultaneous action. Aron’s day, this editing technique tells us, is just like any other. Aron meets two hikers (Kate Mara and Amber Tamblyn) and the avid outdoorsman leads them to an underground pool. Their meeting, one girl foreshadows, probably didn’t even figure into Aron’s day.

Aron’s real story doesn’t begin until he becomes trapped in a canyon, his arm pinned by a boulder against the canyon wall. The kinetic energy established early on pares down. With Aron’s realization that he is alone and his attempts to lift or chisel away at the rock will be wasted, 127 Hours becomes a chronicle of dire survival.  Aron retreats into his mind, turning to a video camera to record messages and delusions of his past experiences, family, and relationships to survive.

Boyle and cinematographer Anthony Dod Mantle never stray from showing you this amazing stretch of Utah wilderness and how alone Aron Ralston really was. The canyon Aron inhabits is small; in five days it becomes his home and he knows every detail of it. Without his own knowledge of survival tactics, technology and, above all, the power of his mind, there is no way he could have lived.

How do you capture what was a grueling and primarily mental event? It is, in part, the pacing and energy of 127 Hours that makes the film what Roger Ebert describes as “an exercise in conquering the unfilmable.” The film begins fast and never falters, not even in the sequences when Aron is completely alone. 127 Hours is as gut-wrenchingly powerful as it is a testament to the vitality of the human spirit. It is fitting then that 127 Hours ends as it begins. With a reminder that Aron Ralston is just another person apart of the world’s daily grind.

This interview with Slumdog Millionaire director Danny Boyle is from a few weeks ago. Enjoy!

I’m going to be so happy after the Academy Awards because then I can finally stop posting about Slumdog Millionaire winning every award possible. It is kind of getting redundant and boring.

In addition to winning the WGA for Best Adapted Screenplay this weekend, Slumdog swept the BAFTAs, receiving 7 awards. Here is the complete list of BAFTA winners.

THE CARL FOREMAN AWARD
for Special Achievement by a British Director, Writer or Producer for their First Feature Film
Steve McQueen (Director/Writer) – Hunger

FILM NOT IN THE ENGLISH LANGUAGE
I’ve Loved You So Long – Yves Marmion, Philippe Claudel

The complete list of BAFTA Winners can be found here.

Slumdog Millionaire has emerged out of nowhere to become this year’s Oscar favorite. But why? There are six reasons, according this article, for Slumdog Millionaire‘s massive appeal and success. Here are the two that stand out to me:

5. The Tourist Factor: For those whose only exposure to India might have been phone calls to customer service and the odd curry dinner, “Slumdog” is an eye-opener. Boyle resisted stepping back and shooting the movie like a travelogue. Instead, he thrusts the audience into a street-level view of the sights and sounds of India — from the slum’s crowded back alleys to the new gleaming towers of Mumbai, from the Taj Mahal to a stomach-churning outhouse. When you watch “Slumdog,” you feel like you’ve been to India.

6. Bollywood: Remember back during the early ’90s when Tinseltown did a collective double-take about wildly over-the-top flicks coming out of Hong Kong, movies like “The Killer,” “City on Fire” and “Supercop”? It wasn’t long afterwards that the likes of John Woo and Chow Yun Fat were making movies stateside and Hong Kong choreographers like Yuen Woo-ping were in high demand to add some kung fu spice to films like “The Matrix.” Well, the same might be happening now with Bollywood.

I just don’t get the hype surrounding Slumdog Millionaire. It’s is a good story with a nice happy ending but as far as it being the best movie of the year… I just don’t see it. Maybe I have to see it again and then I’ll jump on the Slumdog bandwaggon. But for me, at this moment, there is something not quite appealing about Slumdog Millionaire.

I am glad that this article mentioned “The Tourist Factor” because I think that plays a huge part in Slumdog’s appeal. It is just another example of how the West becomes completely enthralled by the East.

Here is my review of Slumdog Millionaire.

Slumdog Millionaire is this year’s movie that has seemingly come out of no where to become a critical darling. It has been nominated for practically every award in existence and has been on ample Top 10 lists. So why the hype?

Jamal Malik, a former street child from the slums of Mumbai, is a contestant on Kaun Banega Crorepati, the Hindi version of Who Wants to Be a Millionaire. With the odds stacked against him, Jamal has somehow makes it to the final question and now stands to win 20 million rupees. Naturally, Jamal is accused on cheating and is brought into police custody for an interrogation session that slowly weaves the web of Jamal’s past.

We learn about his childhood in the slums, his relationship with his brother, Salim, and his love for a local street girl, Latika. The events from his childhood provide enough clues for Jamal to know answers to the questions.

Jamal is played by Dev Patel, who is best known for his role on Skins, a British teen drama that I love. Slumdog Millionaire has provided Patel with the breakthrough role of a lifetime, earning him a Screen Actors Guild nomination.

The movie is a typical Hollywood melodrama aimed at hooking an audience in but it ends with a typical Bollywood dance number in order to remind us that this is a movie about India. In many ways, this could be the movie that finally gives Bollywood a mainstream Hollywood audience. But is this a bad thing? Not really, as long as audiences are able to recognize this.

At the end of the day, Slumdog Millionaire is an intense experience; it will literally have you at the edge of your seat. Simon Beaufoy’s script, Anthony Dod Mantle’s cinematography, Chris Dickens’s editing, and A. R. Rahman’s soundtrack all come together to tell this wonderfully romantic story and simple reminder about the power of the human spirit.

I think Todd McCarthy of Variety sums up the film best when he wrote about the film in September. “As drama and as a look at a country increasingly entering the world spotlight, Slumdog Millionaire is a vital piece of work by an outsider who’s clearly connected with the place.”

It is hard to resist and hard to forget the charm of Slumdog Millionaire.