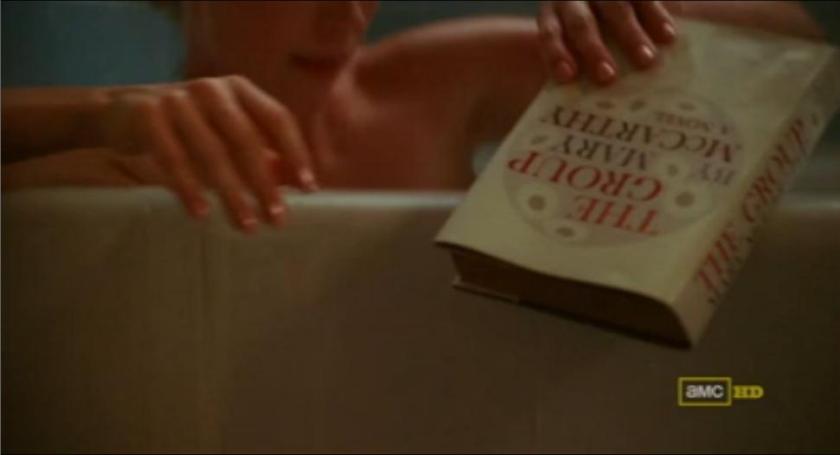 On Sunday’s episode of Mad Men, there is a brief but telling shot of Betty Draper reading Mary McCarthy’s The Group. Betty is seen reading the book in the bath tub. Presumably her children have gone to bed and she is waiting for her husband, the series antihero-hero Don Draper, to return home. This 10-second scene is bookended by a scene of Don in the midst of yet another affair. Talk about subtext.

The Group was published in 1963, the year this season of Mad Men is set. The novel follows the lives of eight Vassar graduates (class of ’33) until the onset of World War II in 1940. The group—Kay, Pokey, Helena, Lakey, Dottie, Polly, Priss and Libby—are first introduced at Kay’s wedding to a New York theater critic and they reunite at her funeral seven years later. McCarthy presents liberal and sometimes conservative views on topics ranging from contraception to social work. This provides an excellent portrayal of the decade.

It is fitting to me that Betty Draper, a trapped suburban housewife and herself a graduate a Seven Sister college (Bryn Mawr) would be drawn this novel. It reflects her relationship to the world as a high society woman, disconnected from reality. It is never revealed in the book whether Kay’s death is accidental or suicide; she dies a woman destroyed by her failed marriage and ruined social standing.

I can’t help but read this as yet another ominous sign for the finale Mad Men‘s third season, which has already been hinted will occur simultaneously with President Kennedy’s assassination. If anything, it provides a deep insight into Betty Draper’s deteriorating state in the wake of her discovery of her husband’s secrets.

Oprah Winfrey has been busy. The television icon has relaunched her book club, interviewed Whitney Houston and plans shut down downtown Chicago. But the most unexpected of these is a 60s themed episode that aired on Sept. 21. Don’t tell Oprah this, but she is just following a sudden trend to embrace everything 60s thanks to the success of Mad Men. Fashion trends, barware, music and even the surge in sales of Frank O’Hara poetry, can all be contributed to this show.

Mad Men, created and produced by Matthew Weiner, premiered in July 2007. It has received critical acclaim for its historical accuracy, visual style and exceptional cast performances. This past Sunday it was named the Best Television Drama at the 61st Annual Primetime Emmy Awards for the second consecutive year. Now in its third season, Mad Men continues to mesmerize audiences week after week.

Set in the early 1960s, Mad Men follows the employees of Sterling Cooper (a fictional New York City advertising company) and their families. The drama centers around Don Draper (Jon Hamm), Sterling Cooper’s creative director. Draper, a man who creates the falsities of reality, leads a double life where his past is constantly in conflict with his present. Not even his wife Betty (January Jones) knows about his true identity.

While the Drapers and their seemingly perfect but painfully horrible family life drives the series, it is the supporting characters who provide the show with exceptional substance. The best of these characters is of Salvatore Romano (Bryan Blatt), the closeted Art Director for Serling Cooper. This storyline about a taboo of the decade relates the period to current times.

Moreover, in an industry where compelling female characters are few and far between, Mad Men features the best on television; there is Joan (Christina Hendricks), the office manager and her desire for the ideal husband, and Peggy, the only female copywriter, and her aspirations to be a successful working woman. Peggy’s second season storyline about her heartbreaking affair with married accounts executive Pete Campbell is among the show’s most powerful moments. Then there is Betty Draper, deeply pained and destroyed by domesticity and her husband’s infedilities, she clings to the hope that the birth of her third child will create the domestic bliss that she longs for.

As a show dependent on historical accuracy, Mad Men not only revolves around showing the cultural fads, but also explores how the tumultuous time period affected the Americans that lived and shaped it. (It will be thrilling to watch how this show addresses the Civil Rights Movement, which has been rarely addressed so far). Season two ended with many characters not knowing their fate as the Cuban Missile Crisis loomed. It has already been suggested that season three will conclude right around President Kennedy’s assassination–an event that no doubt reflects both overt and subtle distress in the Mad Man of the 1960s.

My absolute favorite television show, Mad Men, returns August 16 for its third season. I cannot wait to see what happens next. The poster for the upcoming season, which just speaks to the wonderful, creative awesomeness that is Mad Men. 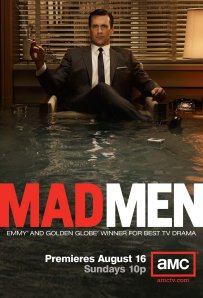 Here our anti-hero Don Draper (played by Jon Hamm) is just sitting, casually smoking a cigarette as the world around him floods. In the larger version of the poster you can see how much more complex the poster is, with Draper’s scowl becoming more apparent.

I cannot wait for the third season premiere. I have so many ideas of what could happen but I know none of them will happen, which makes Sterling Cooper’s return all the more exciting.

Mad Men is another recent discovery of mine. I just decided to rent the first season of a whim and watched all thirteen episodes in less than three days. Less than a week later, there was a first season marathon on AMC so I watched the entire season again.
From the writing and the direction to the characters, everything about this show is just brilliant. Who knew that a show about 1960s advertising agency could be such a compelling drama.
My favorite moment is by far The Carousel scene in the season finale, when Don Draper (played by Jon Hamm) pitches an ad campaign for Kodak:
No wonder it is nominated for 16 Emmys.
If you’re interested, here is a crash course all about Mad Men before tonight’s premiere.