Here is what I watched this month.

END_OF_DOCUMENT_TOKEN_TO_BE_REPLACED 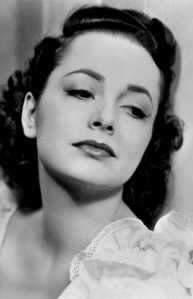 Olivia de Havilland, one of the few surviving Hollywood actresses from the 1930s, turns 93 today. De Havilland began her career in 1935, co-starring in Alibi Ike. Soon after, de Havilland co-starred with Errol Flynn in Captain Blood, The Charge of the Light Brigade and The Adventures of Robin Hood. They would star in eights films together overall.
Today, de Havilland is perhaps best remembered for her role as Melanie in the classic epic, Gone With the Wind. She received her first of five Academy Award nominations.
By the 1940s, de Havilland had become frustrated with the roles assigned to her by Warner Bros and began to reject several parts. When her contract with the studio expired, Warner Bros. informed her that it was extended for six months because of her uncooperative nature. Therefore in 1943, she mounted a successful lawsuit (similar to Bette Davis’ lawsuit in the 1930s) against Warner Bros and the result granted more creative freedom to actors. The lawsuit is now known as the “de Havilland law” and has had a lasting impact in Hollywood.
Her struggle against the studio ultimately paid off. De Havilland began to play more complicated roles, ones where she didn’t have to solely be pretty or the damsel in distress. She received her first Academy Award in 1946 for To Each His Own.
When I think of Havilland, I don’t think of her career-defining role in Gone With the Wind. I think of the final scene in The Heiress. Here Morris Townsend (played by Montgomery Clift) confesses his “love” to Catherine (de Havilland), who he previously abandoned after her father had threatened to disinherit her years before. Catherine, now wealthy following her father’s death, pretends to forgive him and agrees to marry him. Only she does not pack her bags. Instead she orders the maid to bolt the door and is last seen silently ascending the staircase as Morris pounds furiously at the door.
De Havilland received her second Academy Award for this performance and it is one of my absolute favorite performances in all of cinema. I have read that de Havilland is currently penning her memoirs and that is something I look forward to reading.

Along with her sister Joan Fontaine (also an Academy Award winner for 1941’s Suspicion), de Havilland is considered one of the last leading ladies from the studio era.

She is probably best known for her role as Melanie Wilkes in Gone With the Wind.
She is the film’s last surviving principal cast member.
Other notable roles include:
Maid Marian in The Adentures of Robin Hood
Emmy Brown in Hold Back the Dawn
Jody Norris in To Each His Own
Virginia Stuart Cunningham in The Snake Pit
Catherine Sloper in The Heiress
Miriam Deering in Hush…Hush, Sweet Charlotte
———–
The Heiress is without a doubt my favorite Olivia de Havilland movie. She delivers powerful performance, especially during the final scene when she is walking up the stairs, is AMAZING. There is reason why she won her second Oscar for this role.
De Havilland won her first Oscar in 1946 for To Each His Own
Here is a clip from Hush…Hush Sweet Charlotte (1964), a great movie starring Olivia de Havilland (playing against type) and Bette Davis.
For more information on Olivia de Havilland, visit TCM Movie Database; IMDb; Internet Broadway Database
There is also this 1995 interview with de Havilland from the Screen Actors Guild that’s rather interesting.