I watched The Town last night. It was the first time I watched this Ben Affleck-directed crime film since I saw it in theaters last October and my thoughts are essentially the same. Here is an excerpt of what I wrote at the time:

What The Town demonstrates is Affleck’s exceptional ability as a director to tackle large-scale productions such as this. Affleck could not have executed the brilliantly crafted chase sequence set in Boston’s congested North End more perfectly.  But one good chase sequence that has you jumping in your seat explosion after explosion cannot and does make a movie.

I don’t know or how but I also apparently enjoyed Blake Lively’s performance back then. Go figure. (To be fair, my hatred against Lively has only grown in the last year.)

So I was less enthralled by The Town this time around. Here are five things I realized about The Town thanks to a second viewing. END_OF_DOCUMENT_TOKEN_TO_BE_REPLACED

The news of British actor Pete Postlethwaite’s passing has been a blow to the film and stage communities.

How wonderful is Daniel Day Lewis’ tribute to his co-star?

Pos was the one. As students, it was him we went to see on stage time and time again. It was him we wanted to be like; wild and true; lion hearted; unselfconscious and deliciously irreverent. He was on our side. He watched out for us. We loved him and followed him like happy children, never a breath away from laughter. He shouldn’t have gone. I wish so much he hadn’t. There’s a tendency to make lists at this time of the year. When we get to the Best of British, if Pete isn’t at the top of that list, he shouldn’t be far from it. 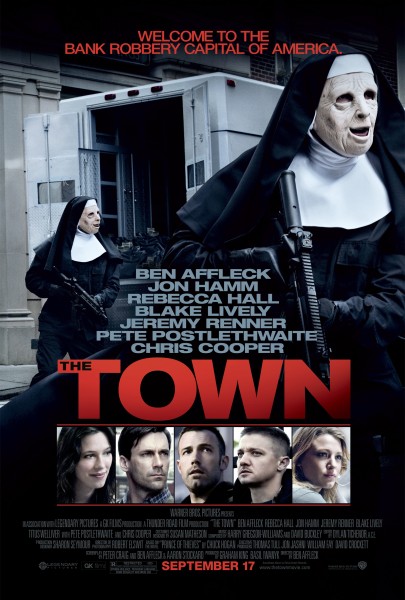 Ben Affleck’s second directorial effort, The Town, is a part of an emerging subgenre of Boston-set crime films that include Mystic River (2003), The Departed (2006), and Affleck’s debut feature, Gone Baby Gone (2007). In The Town, Affleck expands the scope of his lens with this film about Charlestown bank robbers.