This week on Skins, it has arrived: chlamydia. See PTC, this show does have a redeeming message! Don’t be a douchey manslut! When Michelle finds out about this unfortunate – and that it didn’t come from that just as nasty hot tub in her backyard – she has to confront everything she has long denied about her relationship with Tony. He’s a serial cheater (who Tony cheats with is another issue) and doesn’t care about her.

Lets get into it.

END_OF_DOCUMENT_TOKEN_TO_BE_REPLACED

It is hard to believe but we have passed the midpoint of the first season of MTV’s Skins experiment. The show has had its ups and downs as the pieces come together. If you made to choice to stick with and not overwhelmingly compare this series to the UK version, then you probably have been pleasantly surprised. (If you haven’t read The New Yorker’s recent review of Skins, do so now.)

Monday’s episode focused on Abbud, played by Ron Mustafaa. So far Abbud has been the series most peripheral character, the  human equivalent of a lapdog. Abbud can be overly energetic, a bit sexually depraved, sometimes Chris’ sidekick, and another straight boy yearning for Tea Marvelli. And sometimes, he prays to Allah. Abbud also makes some shocking discoveries about his friends.

Let’s get into it.

END_OF_DOCUMENT_TOKEN_TO_BE_REPLACED

I have jokingly referred to Liv as Jal 2.0, but after last night’s episode I quickly realized that Liv is no Jal. She is stuck somewhere between her family’s expectations, her best friend’s deception, and her desire for someone to care about her. 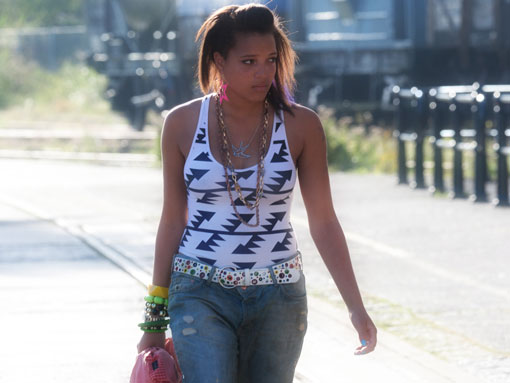 END_OF_DOCUMENT_TOKEN_TO_BE_REPLACED

Something pretty awesome happened on MTV last night. There were two successive episodes of Skins that were pretty good. Skins is really starting to find its groove, which is awesome for us viewers.

It was Stanley’s episode. He’s the quiet and sensitive yin to Tony’s yang. After a series of events that lead Stanley to face a judge, he begins to see how manipulative and calculating Tony is. There were some hilarious moments (Michelle’s girl fight with Tabitha) and some real character development (Cadie).  Let’s get into it.

END_OF_DOCUMENT_TOKEN_TO_BE_REPLACED

We’ve reached the fourth episode of MTV’s Skins experiment. Slowly it is coming together. The more you watch each episode, the better they get. In the case of Cadie Campbell, Britne Oldford shined.

Cadie is trying to find some purpose in her life. Her parents and her therapists don’t know how to deal with her emotions. Her friends just use her for her drugs. Her life is insane. Here is what happens when one therapist convinces her to go off her meds