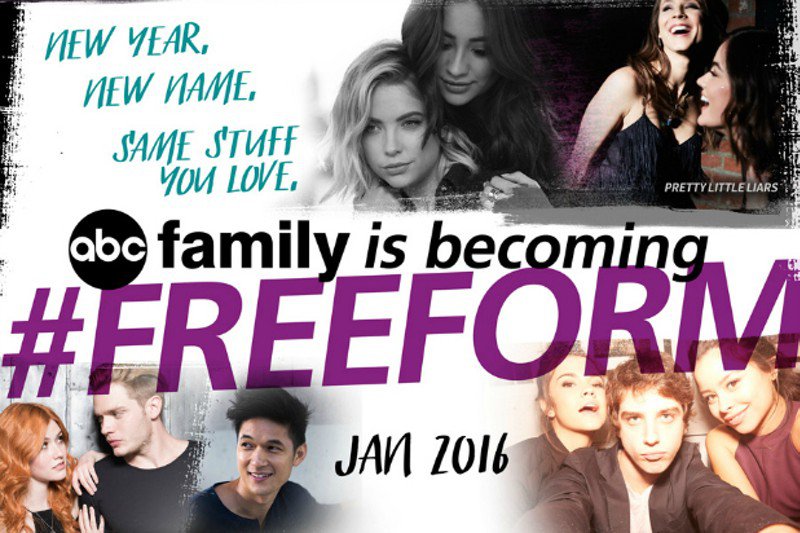 Have you heard about Freeform? If you haven’t, then you’re probably not invested in Pretty Little Liars’ five-year jump. (Seriously, can anyone explain how Alison is a high school English teacher?)

Announced in October, Freeform is the new and improved, edgy teenage version of ABC Family. It’s a less wholesome kind of family with more of exactly what ABC Family has been producing since 2010, when PLL became the network’s staple show. Unlike Secret Life of the American Teenager,  current shows like Switched at Birth, Chasing Life and The Fosters present complicated and poignant portrayals of young adulthood and families without preaching or pandering. Nevertheless, the rebrand is a necessary shift for ABC Family, a cable network whose key audience has changed and whose brand identity has always been… wait for it… freeform. According to Variety, Freeform “marks a continued effort to evolve the young-skewing network past traditional family viewing and toward its target audience of “Becomers,” a network-coined term defined as those in the life stage spanning ages 14 to 34”.

That’s right, “becomers” and no, it doesn’t make sense to me either. The ABC Family executives’ rationale behind the term is a head-scratcher but such is the nature of network rebranding, which typically occurs during times of crises. Yet, there are more prevailing concerns about ABC Family’s relaunch and it connects to one of favorite my topics: the relationship between American evangelicalism and media companies.

But first, why is Freeform happening now? For many cable networks, brand rehabilitation is a necessary evil. Particularly now. In the age of digital streaming, audience viewing habits have drastically changed and viewership is down. This is a trend for all cable networks.  As media and tech analyst Richard Greenfield told The New Yorker: “The way people watch TV really is changing dramatically. And no traditional media company is doing a good job of dealing with it.” For ABC Family, total audience is down 8% and it has also seen a 7% decrease in the coveted 18-to-34 demographic.

Logistically speaking, the timing of the rebrand is perfect. Not only do ABC Family’s cornerstone programs have a frenzied social media following (#Jonnor), but also 25 Days of Christmas is the network’s most profitable and visible programming block (100 million viewers tuned in 2014). If you’re going rebrand as minimally as possible, then promote the process when as many as people are watching. In other words, it was basically now or never for ABC Family.

But as Ross Garner asserts in a case study of ITV’s rebranding in 2013 : “Equating channel rebranding with periods of either struggle or crisis provides too simplistic an understanding of why these exercises take place.” For ABC Family, now Freeform, here’s the catch. No matter how hard the network tries to shake its wholesome family friendly image, ABC Family associated with Christian broadcasting. How many times have you caught the beginning of The 700 Club at 10 AM, 11 PM or (gulp) 3 AM before cringing and turning off your television? Probably more times than you pray with Joel Osteen on Sunday mornings.

The 700 Club is synonymous with ABC Family. This is because televangelist Pat Robertson founded the network, then called the CBN Satellite Service, in 1977. Over the next two decades, CBN evolved into The Family Channel until it was purchased by Fox in 1998 and became the Fox Family Channel. (Do you remember The New Addams Family or S Club 7 in Miami? They aired on Fox Family.) What was a condition of CBN’s sale to Fox? The 700 Club could not be dropped. The same goes for the Walt Disney Company when it acquired the network in 2001 and ABC Family was born.

What’s truly fascinating? Back in October when Freeform was announced, ABC executives were coy about what would happen to The 700 Club. But here’s  a more direct admission: “The 700 Club will continue to air on Freeform.” The show is worth $42.4 million annually and it is simply impossible to buy out Robertson. (Robertson will probably never die so that option is also out.)

So while a title card at the beginning of The 700 Club attempts to separate the network from Robertson, as Jacqui Shine, writing in The New Republic, notes: “however vigorous Freeform’s rebranding, [Robertson will] continue to lurk in the background.” As Evangelicals tend to do.

When looking at television networks and what are the motivational factors for rebranding, alway keep this in mind: money. Doing business with televanglicals comes with the risk of alienating a target audience but there are often larger financial ramifications when televanglicals are given the boot. It’s the same reason my good friends the Duggars aren’t going anywhere either.

So aside from an obviously frenetic brand identity, this is a central dilemma for Freeform moving forward. It is envisioned as a network for “becomers,” which really means it is a network for millennials. What millennials do not appreciate is hypocritical evangelicals. Whether or not the Becomer audience looks beyond #Ezria or #Brallie to fully see this conflict is an entirely different story.